Gentle Breeze has a new coat, of paint. Steve Marriage has done a great job taking off 30 years worth of badly reacting paint and producing a finish like new.

Because the various layers had reacted and crazed Steve recommended taking the paint back to metal. That revealed a load of mill scale on the roof. That is a problem that starts when the sheet steel is rolled and it gathers ash and adsorbs water before it even gets its first coat of paint. Thus for years it has small rusty patches under the paint. You used to see it a lot on cars in the 70’s, it’s not as common on cars now due to better control of milling fluids and steel treatments.

Anyway all the paint was stripped off by hand and the whole topside primed and then base coated. Steve finished her off with two blues of my choice and a gold/yellow coach line. Three weeks of hard work real paid off.

There is not as much contrast between the blues as the colour chart suggested, but never mind, as the painter said, “it’s subtle”. 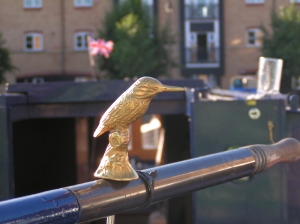 The trouble is that now I am worried about scratches, bumps, knocks etc. Oh well as some else said, you’ll just have to scratch it and get over it.

My contribution to the work was to paint the inside of the doors. I used a one coat paint, and wish that I hadn’t. It took ages to dry and when I peeled of the masking tape it pulled a fair amount of the paint as well. 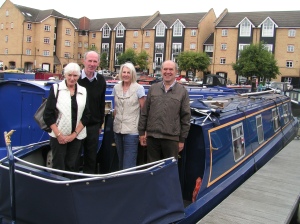 More success was had with the new boat pole and boat hook. Both were given coats of primer followed by exterior gloss.