Over the May day bank holiday the Canal Cavalcade is held and I am on my way there. It is held in what has become known as Little Venice, mainly in the Pool at Paddington. Now to me Paddington’s pool sounds rather what an unfortunate bear may have left behind after an accident while searching for the public conveniences at that great station. It is actually the junction between the Paddington arm of the Grand Union Canal, the Regents canal and the Paddington Basin. There is an island in the middle which the band occasionally share with breeding, noisy, wildfowl. There are main roads around and above the venue with emergency vehicles always on the move day and night. The train station backs onto the basin, it is a commuter route for pedestrians and cyclists and a tourist attraction. It is far from quiet and in a way reminds us that the canals originated as industrial and agricultural utilities.

But here be people, determined to enjoy and share what remains of this heritage with their friends and others. Do visit if you get the chance.

So far my run down towards Paddington has been pretty uneventful depending on what you may consider a significant event. To me it was significant that when, putting supplies on the boat, I dropped my car keys and they landed on a drain grating and didn’t drop through. 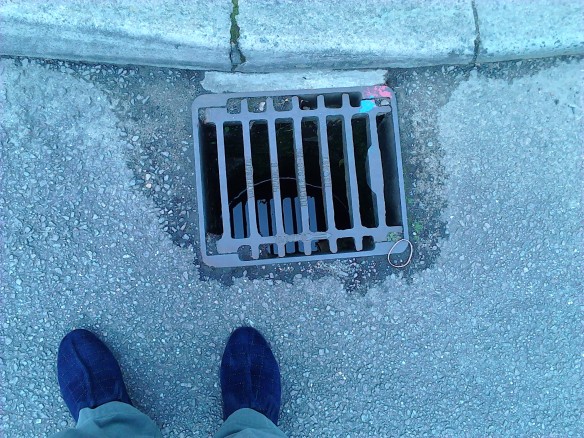 Picture for illustration purposes only and may be different to the actual one, as they say.

I met a set-building crew converting the outside of a lock cottage for use in the sequel to a popular tv series. There was the elderly couple on a hire boat trying to get it back for its due date with the husband declaring locks to be a mystery to him, as he was about to open the wrong paddles.Then when the weather turned cold and rainy my prop  must has decided it was too cold and found a pair of jogging bottoms to wrap around itself. The boat stopped and drifted side on to the canal and the wind started to blow her sideways up the cut. All minor events.

Then there was the stranger looking in through the window and asking first for brandy, then beer, then any alcohol. Not being successful he asked for money. His attire indicated that his religion forbade consumption of alcohol. I dealt with it, it was for me another minor event. But I am left wondering how he experienced that situation, I may never know.

But what is important, what is a significant “event”. Is it only what affects our own experiences, now or in the future? Is it how it effects others’ experiences? If it is then we do things to enjoy ourselves, we do good and creative things to help others have better experiences. And so life goes on based on having better experiences. Or is there something outside of this? Something that echos in the song of the sky lark, that is stirred by the faint perfume of the bluebell, by the knowing smile or sympathetic hand shake.

To me creation, the material universe, can be considered to be a bit like a clock. The clock has no purpose in isolation. The clock may be accurate or wrong,  ornate or plain, all parts working together like clockwork or worn out, but it has no purpose to itself. It only has purpose when there is an outsider who has an interest in the clock.

For me I think the purpose of creation is love, and the outsider is a loving God, at all events. What a great reason to enjoy sharing one’s enjoyment with others!

Back to the boat and  boating …