One of the medical professions principles is Primum non nocere, meaning do no harm. Another good principle is preventive action is generally better than needing to cure. Thus it was reasonable for me to go down and check the boat over just after Christmas. Quite pleasant it was too, getting the fire going and listening to the radio. That was followed by an atmospheric ride home. This week it was time for the preventive medicine, or should I say annual engine service. so I cycled down, ready with lunch and expecting to get the fire going and radio playing. First things first though, put the kettle on. But the electric igniter didn’t work, the radio would not play, and lights would not switch on. The long and short of it is that the batteries were flat, very flat, giving out just 2 volts. The reason being that I had accidentally left the nav light on after sorting fuel for the fire over a week ago. So I drove down today to bring the batteries back to the house to try to charge them, which may not be possible. At 110ah each and charging at 8 amps this could take a while. I think tonight I am not going to light a candle, I left one burning last night and that may not be the smartest move with these batteries discharging hydrogen into the lounge.

Never mind, at least  I got the service done today and it started and ran fine (for a 33 year old boat). 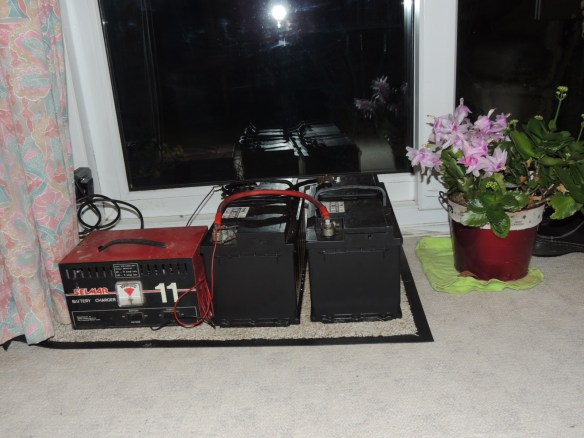