The readers of this update will probably fall into one of three groups, those not interested in mechanical things and bored with such tales, those who already knew how to avoid this error and think me a fool, and the others who can take this as a warning of the little traps out there. When I say traps, what I mean is gremlins because I sometimes feel there is no such thing as an inanimate object, they are all out to get you!.

Well changing an oil filter cartridge is no big deal. Wait until the engine has cooled a bit, prepare to catch the oil spill, unbolt the hanging bowl that holds the cartridge, replace the cartridge, put in the new seal between the bowl and engine, and screw it up. Now I use the phrase “screw it up” advisedly and with power of hindsight. 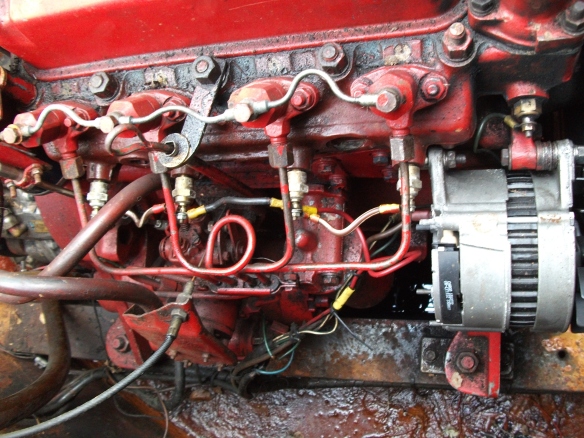 Dip stick and filter is down there somewhere

You see the cartridge came with a seal which although the right diameter just seemed too fat to easily fit into the slot where it should go. Of course you could not see the fitted seal, unless the boat had a glass bottom and you laid on the canal bed. So by feel and with ebbing patience the seal was put in as best as could be ascertained. The housing replaced, oil topped up, leaks briefly, too briefly, checked for and off I went.

Yes off course I checked the dip stick now and then, no I can’t remember how often but I am sure I did. Yes there is always some oil and water in the bilges, how deep I don’t know, not too much though. Did you know that water or oil in the bilges deadens the engine noise. So it can’t be a bad thing can it?

Well on my way back down the Stort, when I was about to meet a couple at Royden I checked the oil. Or should I say checked for oil, it was below minimum! I did not understand this as there were no obvious leaks or puddles over and above the ones normally there, perhaps that’s a lesson itself.

So a quick bike ride to the chandlers at Stansted Abbots (half a day by boat, forty minutes there and back by push bike, over the hill) and I had topped up the oil. I took it right to maximum and felt satisfied.

Two days later and it was still part way between max and min, and the level does depend on how hard you push the old dip stick in. After the Little Venice Cavalcade I though I would check it again, about 23 hours running after the previous check. It took me about five minutes to check the dip stick. I twisted it, swivelled it, sneaked it in, jabbed it in, cleaned it repeatedly, laid it on paper in case the oil was too clean to see. I finally convinced myself that the oil lay on the dip stick just as the new clothes adorned the emperor, there was none! It had all leaked out again, adding to the quietening of the engine, and I was very fortunate that the engine had not been permanently silenced.

This time being near home I was determined to find the leak and fix it for good. Starting with what had last been done prior to the leak appearing I checked the oil filter housing and sure enough it was leaking. On taking it apart I found that the seal had been badly cut by the bowl, so off I went to get a new seal, it only comes with the filter. I was not looking forward to another fight to get an oversized seal into place.

Now this is where the real lesson comes, the new filter came with three seals of varying thickness. Bearing in mind that the previous one had only been bought 3 months ago one has to wonder why didn’t that one come with three seals? 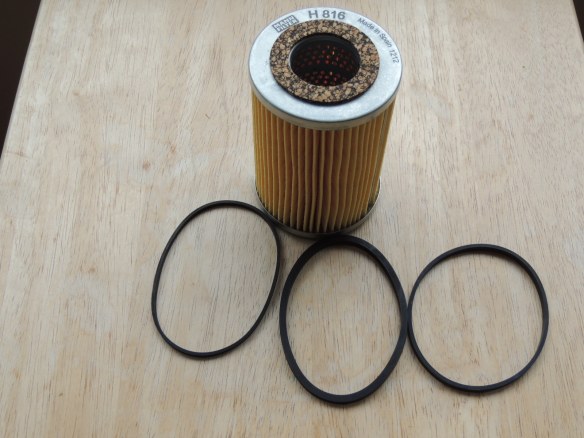 The lesson must surely be, if in doubt don’t just hope it is OK be certain. If a part does not seem right it probably isn’t, take it back and get it sorted.

So armed with the right seal, some new copper washers and gasket sealant to fix other minor leaks I shall return to reassemble the engine. I also think I ought to clean up the bilges once and for all.

Oh, and  a message to a previous owner or mechanic, I found the bolt that you tried to seal with plumber’s tape around the thread (that won’t work), and replaced the tape with the proper washer and sealant. But, bearing in mind what I nearly did to the engine, I should not try to take the mote out of another’s eye when I have been a plank myself! Oh hum, all’s well that ends well, I hope.